Tom Krol is a native of Chicago’s suburban west side. He grew up assisting his father with repair and with handy work in several houses over the years.

He graduated DePaul University with a Bachelor of Science degree with a major in Sound Recording Technology. The college program required classes in both analog and digital electronics.

In 1990, Tom moved to Los Angeles and worked as a technician at Devonshire Recording in North Hollywood, CA where he maintained large recording consoles, wired studios and large audio cable snakes. He soon returned to Chicago to work as a freelance sound engineer with computer-based editing and mixing, as well as technician and session musician at Chicago-area music production houses.

In 1994, he started his own business of sound production that required design and wiring 6 for different audio studio installations over the years.

In 2008, he passed the IL state written exam and the physical skills test as well for a residential electrician's license . The test administrator noted how well Tom performed as a first-time attendee of the test who was also the first to complete the written portion of the exam that day.

Tom continues to work as an independent electrician as well as a freelance sound engineer and on-site technical director where he designs technical setups of tech booths, sound engineers and produces live corporate events. His knowledge of the National Electric Code ensures that his AV tech setups are always safe and efficient.

He also provides award-winning sound mixing, recordings and studio production for Fortune 500 companies, production companies and independent producers. His soundtrack mixes are heard in indie films available at Blockbuster and on CD audio books distributed worldwide by Sony. His soundtrack mixes are also heard on documentaries airing in over 58 countries around the world. His live audio mixing work is heard on nationwide satellite broadcasts for radio and TV. He's the top-call sound engineer for a Chicago production house and has been hired to wire and cable at new studio installations for some of downtown Chicago's largest video production houses. 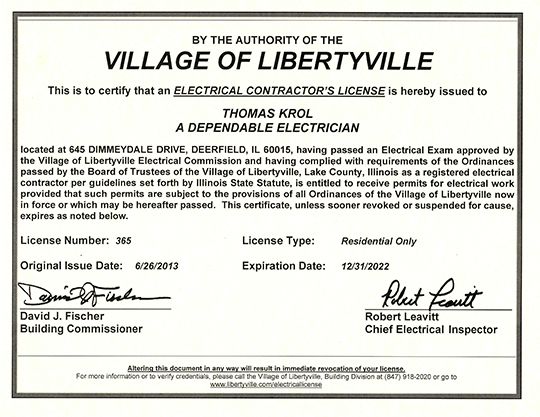